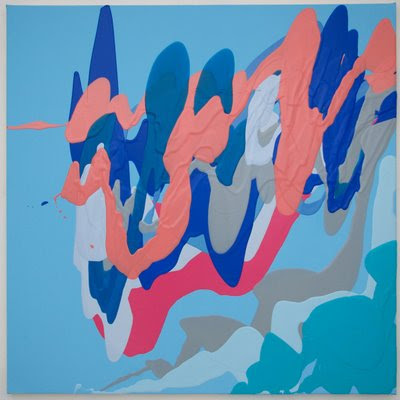 Thomas Jaeckel and David Gibson are proud to present “Barachois” a series of new paintings by Peggy Bates in which the artist continues her fascination with the signification and expressivity of organic form as a direct charismatic link to the natural world. Her most recent body of work has taken on a chromatic tone of coolness which ranges from the icy blue associated with the first days of a new winter season, to day-glo yellow and fuschia, purple, aquamarine, and sea green. The forms which appear in this work are characterized by a scriptlike furtiveness, in which broad swaths of bright colors wade amid a light blue background, just like the eddies of tides which are caught against the sandbars of tidal pools before being swept out to sea. But despite their sensitive chromatic touch, and the antic forms in their foreground, they are characterized by a sense of aesthetic polarity suggesting chiaroscuro. Beyond the demonstrative flow of her marks, there is an intimation that Bates is exploring new ways to signify form, and her new gestures suggest hieroglyphics, LED signals on heart monitors or lie detectors, or brightly colored flags waving in a fresh wind.

The source for Bates's art lies in a desire to embrace landscape within contemporary culture. She explores notions of travel, dislocation, and the human desire to traverse through paintings that reflect places she's visited. To create the works, Bates relies on memory, sensory recollection, and ephemera that she collects along the way. Her usual focus is the peculiarities of each location's topography and the boundaries between land and bodies of water. What resonates in Bates's paintings is an underlying emotional relationship between exterior landscapes and the impressions of the human interior. Reflections of travel are captured in the flow of paint, its direction determined by real or imagined experience. To create the pieces, she pours liquid paint in layers on the canvas, a process that involves a continuous interplay of manipulation and chance. The paintings develop into an arrangement of metaphorical elements: sensual, surrealistic shapes, sometimes in highly charged hues; soft, floating masses; or large pools of paint spilled across the ground. Perception is exaggerated in an organic play of paint as shapes and forms are stretched and pulled. To create the pieces, Bates considers both details observed during her travels and factual details from maps of each location, setting off the experience of the personal with cultural data. Each painting is titled with the name of the place that was its inspiration. Bates encourages viewers to uncover their own sense of the power of fantasy and dream through an exploration of the work. 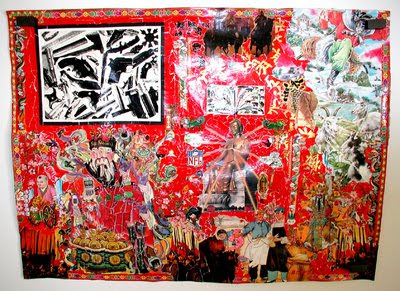 GEORGIA ELROD You Decide, 2005.
Oil and gold leaf on linen… 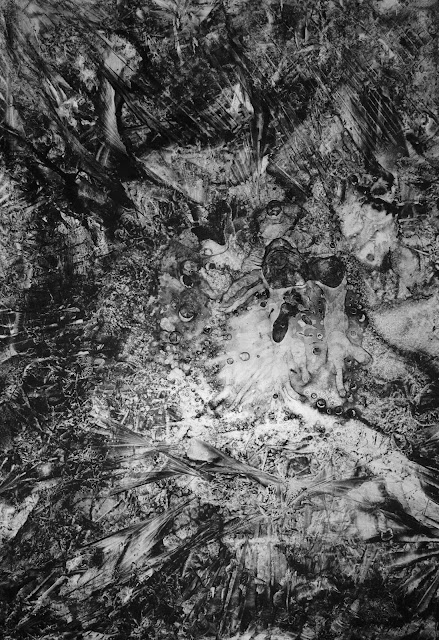 ARTIST TALK "What's Your Thicket? -- Abstraction and Crisis: A Conversation"

Curated with Savannah Spirit and Asya Geisberg
The Casita Maria Center for Arts and Education 928 Simpson Street, Between Barretto and 163rd Streets

This exhibition explores the use of collage as an artistic medium, dissecting its impulses and agendas while providing a wide cross-spectrum of its usage in contemporary art. It addresses the role of material culture in mediating our shared view of reality, the notion of a borrowed aesthetic, and how specific visual agendas express differing cultu…